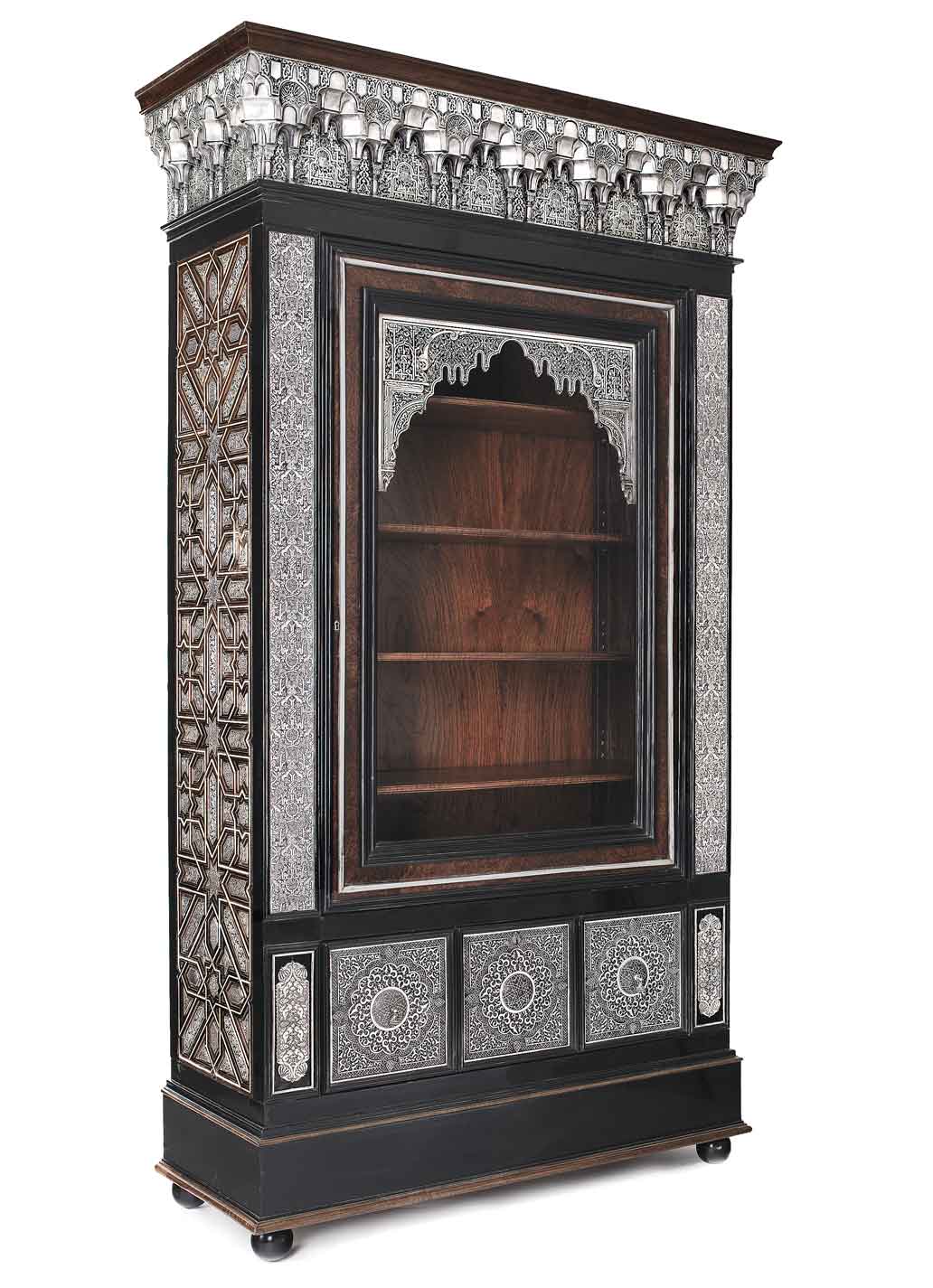 Surmounted by a tapering muqarnas ornamented pediment, above a glazed door applied with a relief-cast foliate multi-foil arch flanked to each side by a rectangular panel moulded with geometric designs with Kufic and cursive calligraphy and the Nasrid motto, all surrounded by arabesque floral designs, the interior fitted with four shelves, above a long base drawer set with three square panels with tangential domed stars and paterae, the sides with lazo de ocho geometric radiating star patterns cast with leaves and seed-head motifs, the back panel with brass plaque engraved.

The Alhambra Palace in Granada was built during the Nasrid dynasty (1232-1492), the last period of Muslim rule in Spain. It was a palatine city of artist patronage in strict conformity with religion. The buildings were therefore highly decorated in the Islamic taste with geometric patterns and elaborate floral decoration interwoven with Arabic calligraphy. Granada was the last surviving bastion of Islam in Spain until captured by Ferdinand and Isabelle in 1492. The Spanish did not demolish the Alhambra, but protected it by making it a Casa Real, a Royal residence. However, by the turn of the 19th century the Alhambra complex had fallen into a Romantic state of disrepair and this, coupled with the beginnings of Spanish Orientalism, drove a movement from within Spain and abroad to preserve and study the palace.

The early Grand Tourists visiting the Alhambra had taken to chiselling away pieces of decoration as keepsakes and to prevent this, and no doubt in part to capitalise on the market for souvenirs, Contreras é Hijo produced plaster casts for sale.

The architect and draughtsman Rafael Contreras (1826-1890) was the most important member of three generations of his family responsible for the restoration of the Alhambra Palace during the 19th and early 20th centuries. His father José Contreras was arquitecto de la Alhambra from 1830 and Rafael continued his work becoming restaurador adornista in 1847. On his father's death, these were acquired by visiting tourists and by museums including the Victoria and Albert Museum in London.

Contreras was awarded a silver medal at the 1867 Paris Exposition Universelle for a series of such casts and also produced scale models of the palace such as that of the Lantern room in the Qubba Mayor made in 1841, which was bought by the Queen Regent in 1847 and is now preserved in the Museo de la Alhambra.

‘Señor Contreras has a studio which was well worth visiting; he has blocks of the Moorish work, exact copies, in miniature, of various parts of the Alhambra Palace, both plain and coloured. They vary in size from eight to twenty inches, and in price from ten to forty dollars. We brought one or two of them to England, thinking they would look well inserted in a wall’. (H. Pemberton, A Winter Tour in Spain, London, 1868, p. 222).

The outside of the armoire is mounted with silvered-metal electroplate reductions, made directly from plaster casts of the decoration drawn from different parts of the Alhambra and combined togther.

The exceptionally detailed geometric lazo star patterns, strapwork and Kufic calligraphy used are taken from motifs repeated throughout the palace. The elaborate shapes of the honeycombed arches relate to the pediment frieze of the facade of the Palacio de Comares in the Patio del Cuarto Dorado.

The Nasrid motto, translated as 'There is no conqueror but God', which appears throughout the palace, features amongst the ataurique floral design to the relief cast panels flanking the door.

Contreras also combined plaster moulds of different parts of the Alhambra decoration in his architectural commissions. For example, the magnificent octagonal domed hall at the Royal Palace of Aranjuez is based upon, but not an exact replica of, the 'Sala de Dos Hermanas' at the Alhambra. Similarly, he combined various decorative motifs to create his own version of the 'Patio de los Leones' for the Anglada Palace, Madrid (see La Ilustracion Española Y Americana, Madrid, 8 June 1895, N° XXI, p. 363). This intention to improve upon, rather than merely preserve, is evident in Contreras' restoration of the Alhambra. For example, in 1858 he added new tiles to the Patio de los Leones and a domed roof to the pavilion which was later removed, but features to a plaster model of the pavilion at the V&A (museum N°. 927:1, 2-1900).

An example of this 87 cm. high model of the pavilion signed, like the present lot, R. CONTRERAS É HIJO ALHAMBRA GRANADA, identical in scale and detail, but made from silvered-metal electroplate as opposed to plaster, sold Christie's, London, 29 October 1998, lot 263. This model and the present cabinet are the only known pieces by Contreras to use silvered-electroplate.

The high cost of producing electroplate reductions distinguish these pieces from Contreras' plaster souvenir casts and indicate that the cabinet was almost certainly a special commission for a collector or a display piece for exhibition. Although no other examples of furniture by Contreras are known, the construction of the cabinet suggests Spanish manufacture which, together with the fixing of the signature plaque to the back panel, affirm that this cabinet was made in the Contreras workshop. 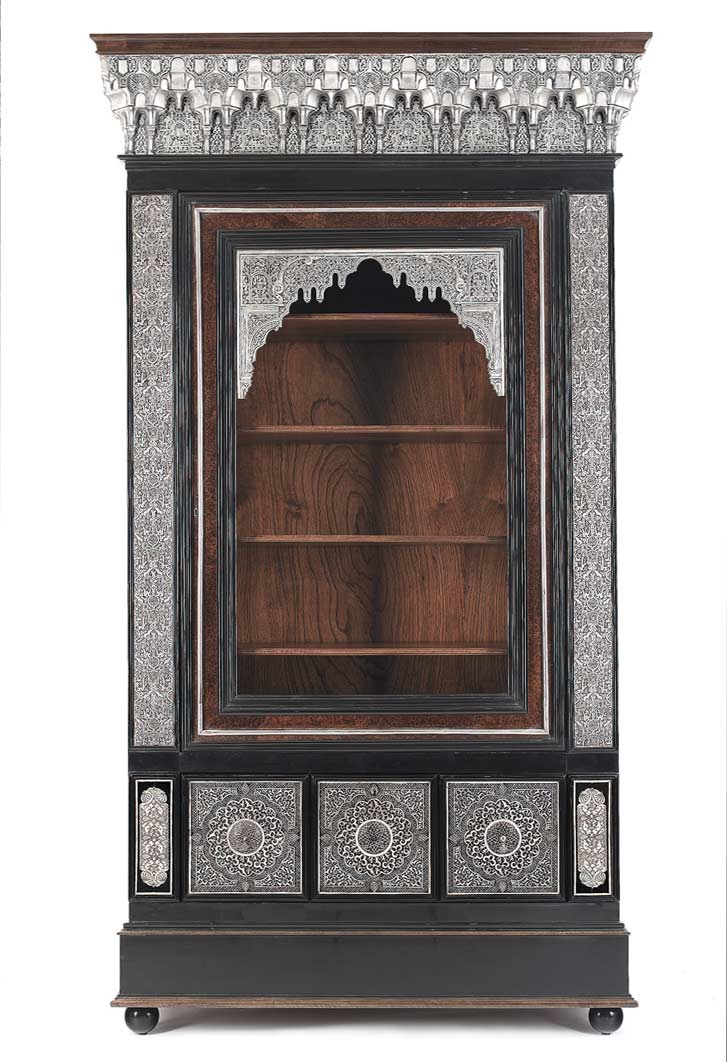 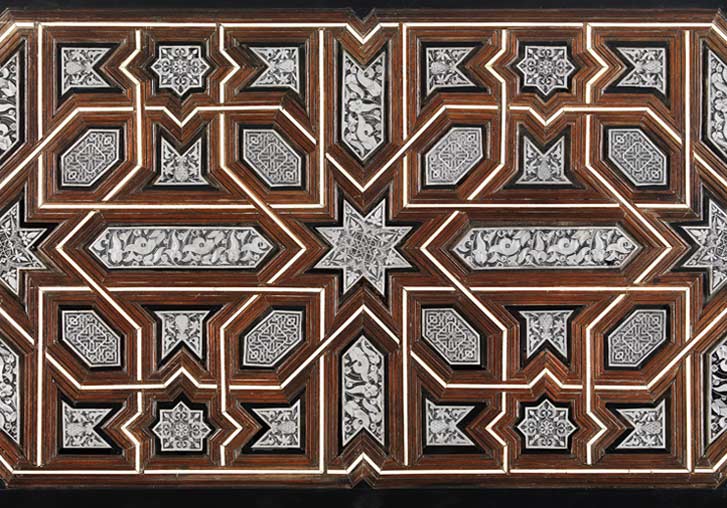 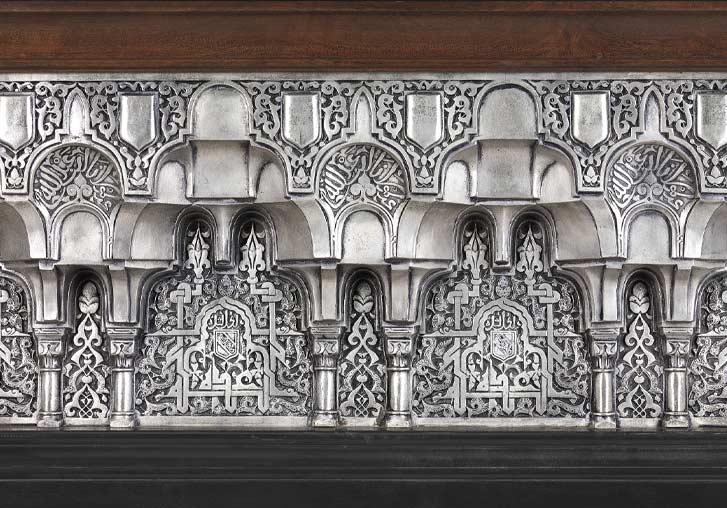 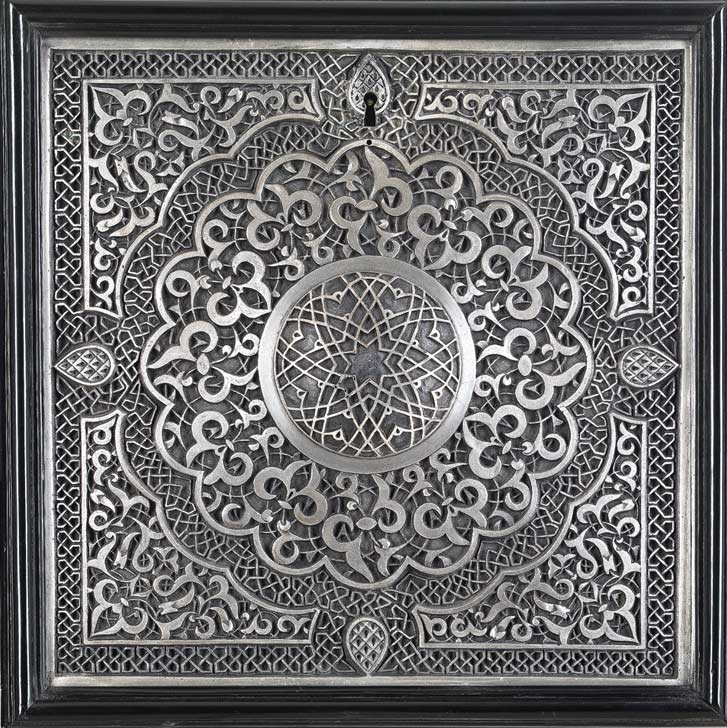