Tapestry APRIL, from a series of the Months, Hunting with falcons for herons

Tapestry APRIL, from a series of the Months, Hunting with falcons for herons 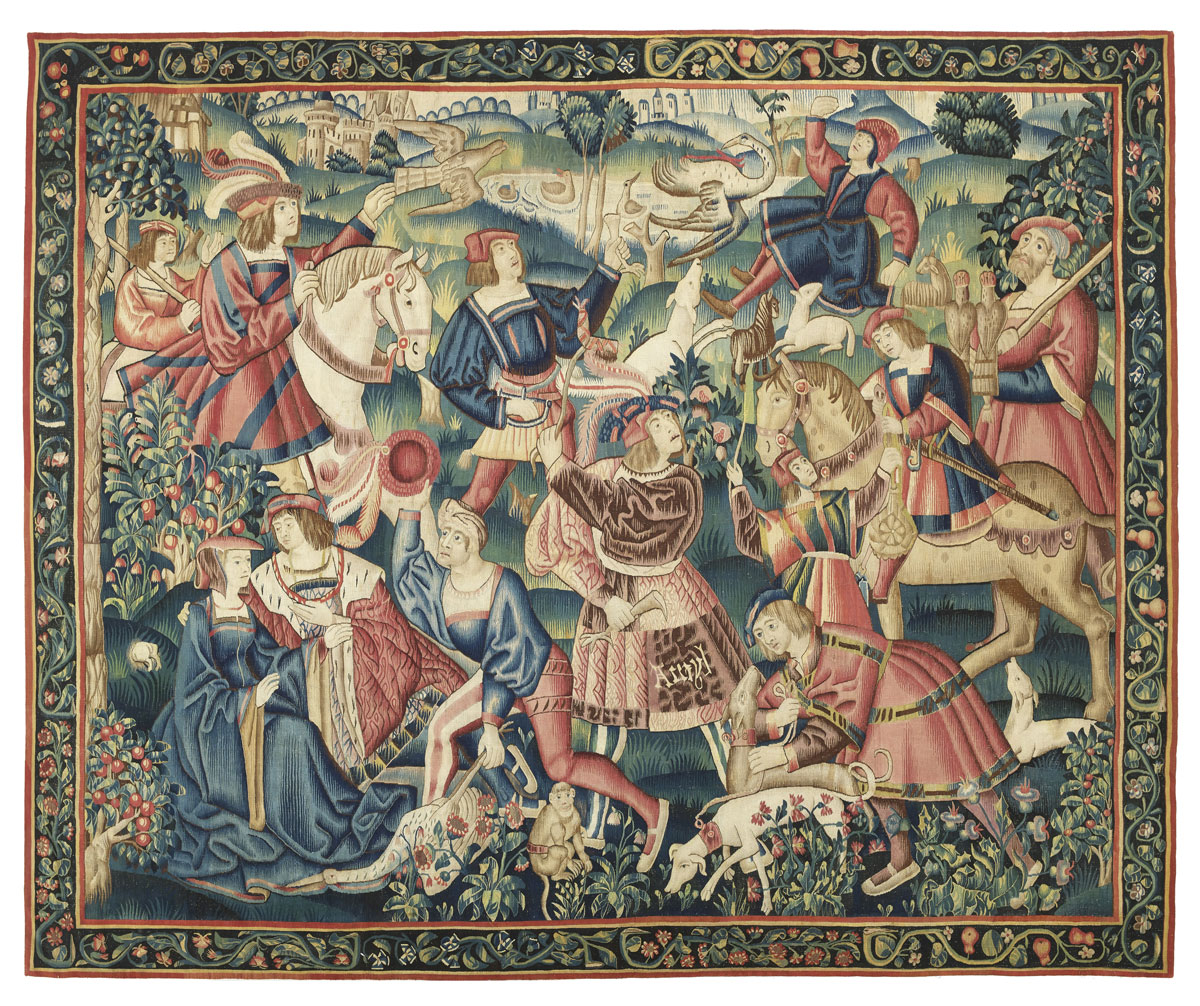 This tapestry depicts a heron flight hunt. Flying hunting is a technique that uses a bird of prey to capture game, in this case a falcon. In a green hilly landscape, a river and a castle in the background, notables hunting are represented on foot or on horseback.

The central figure, who is about to cast his bait, has the word April embroidered on his petticoat. To the left, a hunter lays his catch at the feet of a seated couple of lords. On the right of the middle plane, a hunter holds two falcons on his arm. Their heads are covered with a hood that was removed when they were thrown at their prey.

The heron, a very common bird in the Middle Ages, was hunted with a bow and arrow. The lords maintained "heronries" to hunt falcons. This bird was hunted all the more because it was a food bird, intended to be eaten and which adorned the banquet table. The falcon as a bird of prey trained for hunting in flight was a noble privilege, it is thus the hunting of the lord by excellence. Greyhounds were used to catch the large birds that the falcons brought to the ground. This scene is represented on the right of the foreground.

In courtly literature, the falcon is the attribute of the gallant man and the hunting flight is associated with the courtly love. This theme is therefore very present in courtly love, it is the symbol of Love revealing hearts. The capture of the heron signifying the death of cowardice, is thus a feat of love. Scenes of hunting in flight illustrate many tapestries whose iconography is related to love.

This tapestry belongs to a set of twelve pieces illustrating the months of the year. It is the indication embroidered on the skirt of the central character which allows this attribution. The month of April, associated with spring and therefore by extension with love, is logically represented here by a hunt with love as a background.

It is established that there were at least two weavings of this hanging. The Burrell Collection holds three pieces, including one from April, woven from the same cartoon as this tapestry but with some differences. The lower part of the English piece is decorated with a frieze of fleur-de-lys. This same pattern is found in another tapestry of the Burrell collection, Camp of gypsies, woven in Tournai in the workshop of Arnould Poissonnier around 1520.

The Musée du Louvre keeps the month of May, currently on deposit at the Museum of Fine Arts in Arras. This tapestry has the same floral border as our piece. Another piece, probably belonging to the same weaving and representing the month of September, would be preserved in the museum of Saint-Lô[1].

A tapestry entitled February, representing characters sitting near a fireplace and having a border almost identical to that of our piece was sold in 1926 by John Duveen. It could in all likelihood belong to the same weaving as our tapestry.

The designer of this hanging is unfortunately unknown. The iconographic source is perhaps to be found in the books of hours, works that inspired many artists to create tapestries.

For example, some of the figures in the Burrell Collection's Stag Hunt are faithful replicas of those in a footnote illustration in the Livre d'heures à l'usage de Rome published in Paris by Philippe Pigouchet for Simon Vostre in 1498. This book was also used as a model for the designers of the series devoted to the Life of the Virgin, the Scenes of the Infancy of Christ and the Scenes of the Passion.

Hunting was one of the most represented noble occupations in early sixteenth-century Tournai productions. We can quote among others a Departure for the hunt preserved in the museum of Cluny, a Return of the hunt in the National Gallery of Washington, the Stag Hunt of the Burrell Collection mentioned above, a Stag Hunt, former Seligman collection whose current location is unknown. This last piece presents many similarities, in composition and style, with our tapestry. Its weaving is given in Tournai but the date of production indicated, 1550, seems too late, this piece having in all probability been realized around the years 1520.

Our April weave belonged to the collection of the British architect Robert Lorimer. Lorimer was Burrell's intermediary in the purchase of his version of April, shortly before 1901. In 1902, when Burrell took on the task of decorating Burrell's dining room, he placed the three pieces of the hanging there and they fit in perfectly. It is interesting to note that he acquired the three tapestries from the Burrell Collection and his own only a few months apart. Could these four tapestries have had the same provenance? Unfortunately, the current state of research has not yet allowed us to determine this.

[1] According to the catalogue of the Burrell Collection but the curator of the museum of Saint-Lô has no trace of such a piece in her database.

From the Collection of the late Lady Lorimer

Exhibition of tapestries from the Lorimer collection, Saltire society, Edinburgh 1951 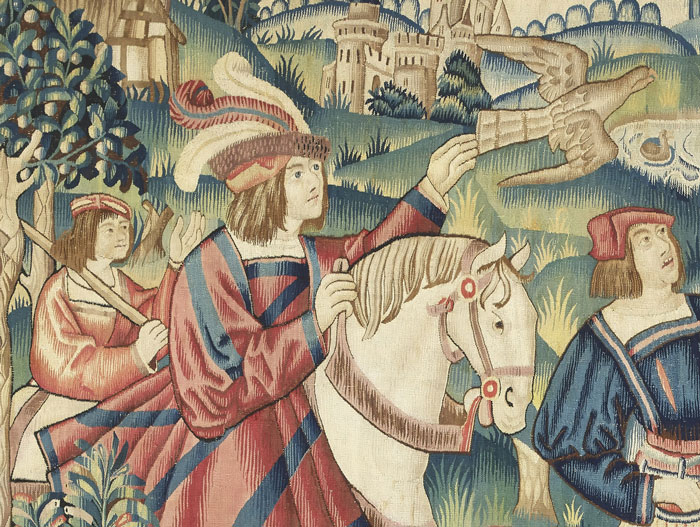 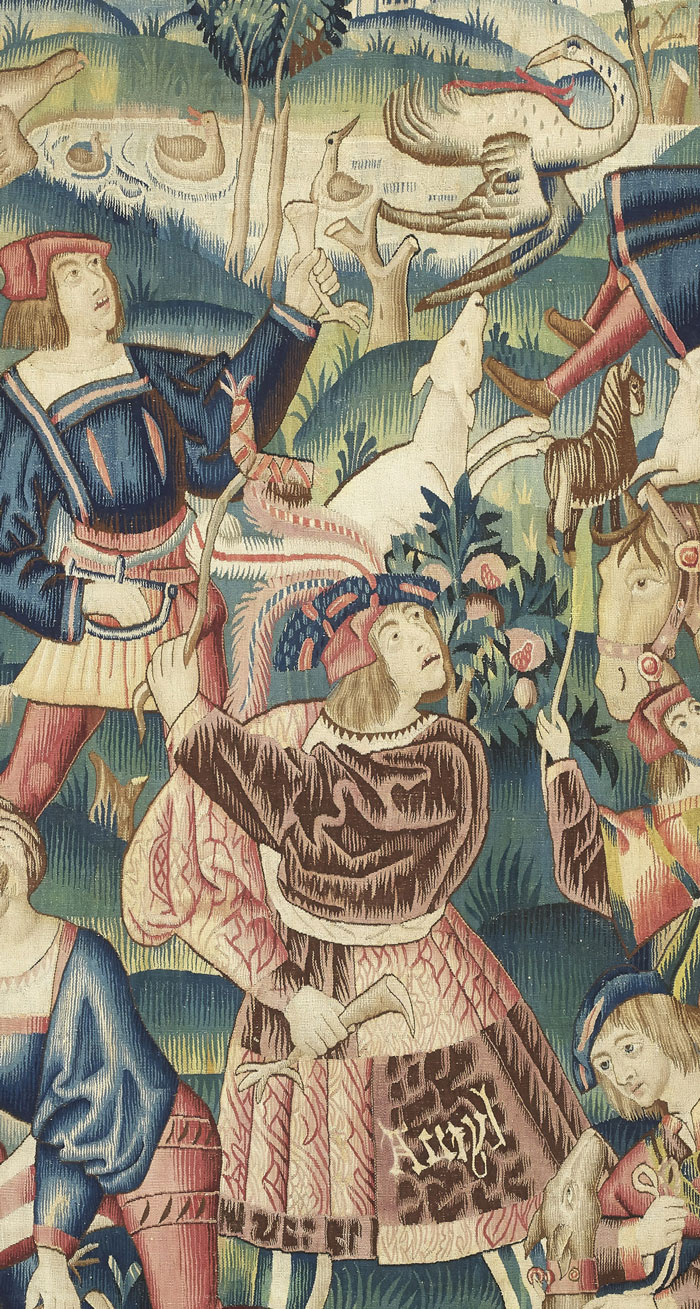 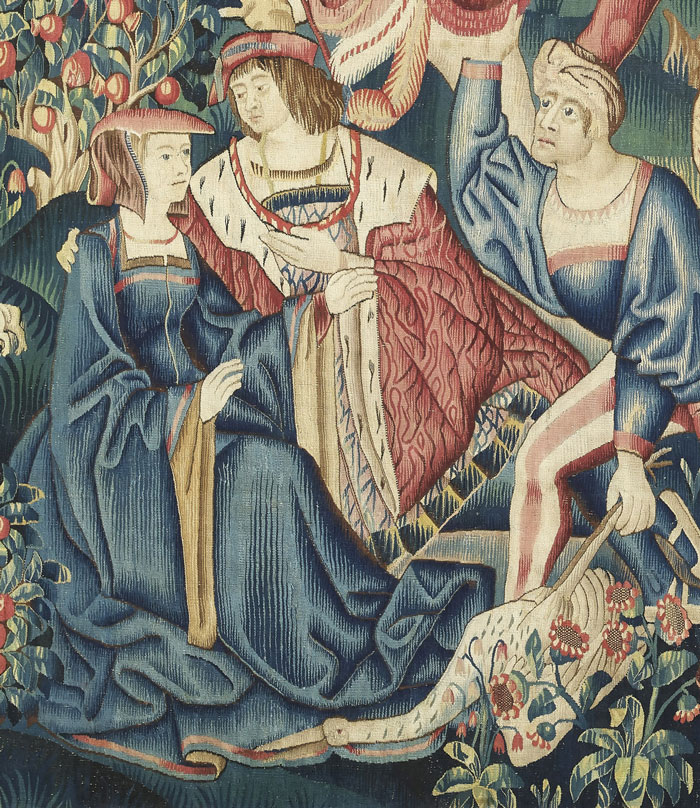